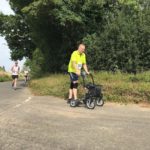 Paul Jenkins was diagnosed with multiple sclerosis (MS) in 2003, and has been living with post-traumatic stress disorder (PTSD) since being involved in a car accident when he was 19...

Paul Jenkins was diagnosed with multiple sclerosis (MS) in 2003, and has been living with post-traumatic stress disorder (PTSD) since being involved in a car accident when he was 19 years old.

Both conditions brought many challenges for Paul. He found that the activities he used to love taking part in, including cycling, were no longer possible, with the decline in his balance that the MS brought on. It was only when he started walking, and taking part in organised long-distance events, that Paul found an activity that would really help him to get his life back on track.

“I felt like I lost my independence, I felt very limited” Paul says about the way his conditions affected his life. It was walking that would help Paul work through some of the issues he was facing. “When I started out, my counsellor talked to my about my coping mechanisms”, he explains. “My walks, that is my main coping mechanism. With doing my walks, it’s actually meant that I’ve been able to get my independence back”.

Paul still encounters difficulties, and his symptoms give him good and bad days. “With the MS and the PTSD I do suffer a lot with anxiety. With the MS obviously my legs do get tired and sometimes I’m in a wheelchair of an evening. Sometimes I’m using sticks, sometimes I’m on crutches”. However, Paul says “it’s what’s up here that counts”.

With doing my walks, it’s actually meant that I’ve been able to get my independence back

He insists that treating his conditions as “his friends” has helped him to stop fighting his symptoms and work with them. “You can’t beat these illnesses and disabilities”, he says. “What you have to do is think OK, I’m getting signals within my body, maybe if I’m feeling tired, the MS is playing up. I just think of it as – you’re my friend, it takes the pressure off yourself”. It’s that acceptance of his conditions and refusal to fight against them, along with his commitment to walking, that keeps him going. “(If you think like that) you’re thinking straight away, I can actually do this”.

For more information about walking, and how it can help you to live with a variety of conditions, take a look at some of the links below. There are lots of ways to get into walking, whether on your own, with friends and family, or as part of a local walking group. Check out our walking page for plenty of tips and suggestions to get you on your feet.

Walking is not only a fantastic way to stay healthy – it also does wonders for your mental health and is a great way to explore this beautiful county and...

Read more about "Walking"Save this item

Walking may be one of the most accessible activities around, but if you haven’t been regularly active for a while it can still feel daunting to step out and give...

Read more about "Getting into walking"Save this item

The benefits of walking are almost endless, and whether you used to walk regularly, have no experience of walking for exercise, or even if you're living with mobility issues, walking can provide real benefits for your health and welbeing.

We Are Undefeatable was created by Sport England, in collaboration with 15 leading health and social care charities, to support people with long-term health conditions to become more active. The...

Read more about "We Are Undefeatable"Save this item

Get our free app

It only takes seconds to install and it won’t take up space on your phone.

Install our app on your iOS device

To install our web app on your iOS device, follow the simple steps below: